V8 Other Other V8 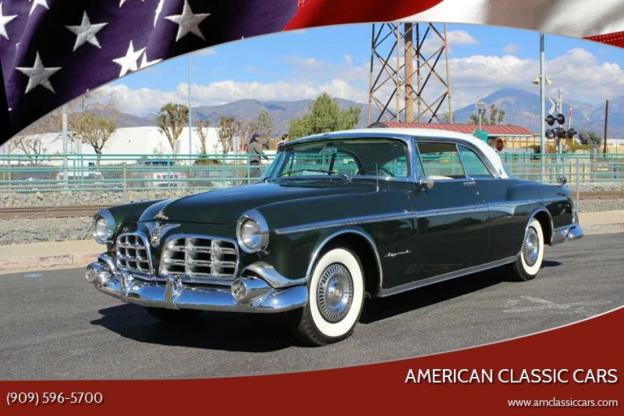 1955 IMPERIAL NEWPORT 2 DR HARDTOP **********AN APPOINTMENT IS NEEDED TO SEE THIS VEHICLE********** Imperial was the Chrysler Corporation's luxury automobile brand from 1955 to 1975, and again from 1981 to 1983. For the 1955 model year, the Imperial was launched and registered as a separate make, apart from the Chrysler brand. It was a product of the new Imperial Division of Chrysler Corporation, meaning that the Imperial would be a make and division unto itself, and not bear the Chrysler name. A time capsule pristine 1955 Imperial Newport. This is an incredible condition classic with all original undamaged body panels, original crystal clear glass, original glistening chrome and bright trims, original 331ci 5.4L 250hp HEMI engine, original PowerFlite automatic transmission, original power steering, original power brakes, original radio (radio does not function), all original gauges function, original jack still in trunk, and original 6 volt electrical system retained. The interior has been replaced with exact original style design and materials. Disc brakes with dual master cylinder have been installed in the front. Electric fuel pump has been installed to aid starting. Exterior glistens in original dark shantag green metallic lower with white top. The 1955 models are said to be inspired by design visionary Virgil Exner's own 1952 Chrysler Imperial Parade Phaeton show cars (which were themselves later rebodied to match the 1955-56 Imperials). The platform and bodyshell were shared with that year's big Chryslers, but the Imperial had a wheelbase that was 4.0 inches longer, providing it with more rear seat legroom, had a wide-spaced split eggcrate grille, the same as that used on the Chrysler 300 executive hot rod, and had free-standing gunsight taillights mounted above the rear quarters. Gunsight taillights were also known as sparrow-strainer taillights, named after the device used to keep birds out of jet-engines. Such taillights were separated from the fender and surrounded by a ring and became an Imperial fixture through 1962, although they would only be free-standing in 1955-56 and again in 1961-62. The FirePower V8 engine was Chrysler's first-generation Hemi with a displacement of 331 cu in (5.4 L) and developing 250 brake horsepower. Power brakes and power steering were standard, along with Chrysler's PowerFlite automatic transmission. Production totaled 11,430, more than twice the 1954 figure. **********AN APPOINTMENT IS NEEDED TO SEE THIS VEHICLE********** ***If you are viewing this on Facebook Marketplace, be sure go to our website to view all photos. (www.amclassiccars.com)*** GIVE US A CALL @ 909-596-5700 WITH ANY QUESTIONS THAT YOU MAY HAVE. OUR BUSINESS HOURS: MONDAY-FRIDAY 9AM-5PM