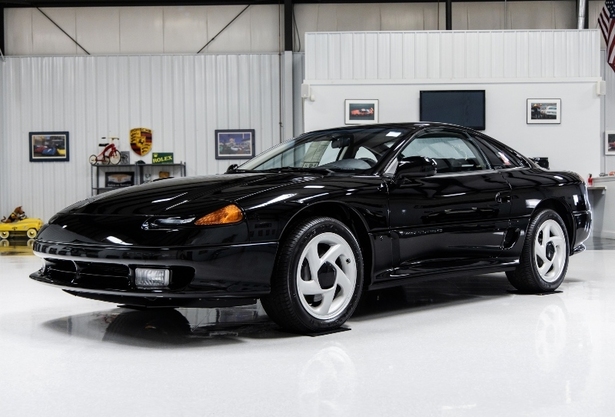 **THIS VEHICLE HAS BEEN CONSIGNED TO AN UPCOMING BRING-A-TRAILER ONLINE AUCTION. ONCE THE DETAILS HAVE BEEN ASSIGNED IT WILL BE UPDATED HERE. STAY TUNED!**

MS CLASSIC CARS BELIEVES THIS TO BE THE BEST AND LOWEST MILEAGE EXAMPLE OF DODGE STEALTH IN THE WORLD WITH ONLY 65 ORIGINAL ONE OWNER MILES!

This very special 1991 Dodge Stealth R/T Turbo is a documented one owner vehicle with only 65 original miles. Yes, sixty five original miles! MS CLASSIC CARS believes this to be the best and lowest mileage example of a Dodge Stealth in the world. The Dodge Stealth was produced from 1991-1996 and was packed with features that were only offered on Supercars of the era. The R/T Turbo is the twin turbo version of the Stealth, the sister car to the Mitsubishi 3000 GT VR4. This car is one of only 9,651 R/T Turbo models produced from 1991-1996. This car is one of only 3,016 R/T Turbo models built in 1991. This car is one of only 698 Black R/T Turbo models built in 1991. The original factory window sticker is still attached to the passenger window. The original factory stickers and factory yellow writing is still on the exterior glass. The original factory markings are on the 17” styled aluminum wheels. It sits on the original Goodyear Eagle ZR45 “Gatorback” 245-45-ZR17 tires. The original factory plastic for the interior steering wheel, seats and rear cargo area included. The original factory carpeted Stealth floor mats are sealed in plastic and included. The original factory spring restraint blocks for shipping and tool bag are included. This car is loaded with original documentation that is included such as dealership vehicle purchase contract, dealership bill of sale, application for title and registration form, Chrysler Motors new vehicle preparation form, Chrysler Motors customer delivery form, Chrysler Motors delivery procedure form, owner’s manuals, dealership business cards and envelopes. Other original miscellaneous items are included such as dealership license plate, 1991 Dodge Stealth brochure, two 1991 Dodge Performance brochures and two 1991 Dodge Stealth service manuals. This car is in showroom condition throughout with no signs of oxidation or deterioration. This car retains all of factory Jet Black paint which was tested with an electronic paint meter by MS CLASSIC CARS. This car retains 100% of its original parts with exception of what was changed during the service with MS CLASSIC CARS which totaled $5,772.34 parts and labor. This car is a true blue chip investment. This is truly a once and a lifetime opportunity!

This car was ordered by Dennis Yauger on October 15th, 1990 from First Chrysler-Plymouth-Dodge, Inc which was located in Manitowoc, WI. This is documented with the original Motor Vehicle Purchase Contract that is included. Dennis ordered this car with a Jet Black exterior and Charcoal leather interior. He also ordered it with Option Group B which included the ultimate sound system. The window sticker MSRP was $31,495.00. As the Motor Vehicle Purchase Contract documents he also added Chrysler Rustproof which was a $239.00 extra charge. Dennis actually had ordered a red 1991 Dodge Stealth prior to this one on January 29, 1991 from the same dealership. This is documented with the original Motor Vehicle Purchase Contract that is included. Dennis was a big Mopar enthusiast and was thrilled about the launch of the Dodge Stealth in 1991. He purchased two R/T Turbo models because he thought one day they’d be very collectable especially the first year model. One was red and the other was black. He took delivery of this black car on May 20th, 1991 as indicated on multiple original documents that are included. This car has a lot of original documentation that is included. From the information gathered Dennis treated this car with the best of care. He stored it in a dry garage with a car cover over it. He never removed anything from the factory on the car to keep it as original as possible. Some of these items included the original window sticker, stickers on glass, yellow writing on glass, marking on wheels, plastic steering wheel cover, plastic seat covers, plastic rear cargo cover and carpeted Stealth floor mats sealed in plastic. On November 4th, 1993 he took it to the selling dealership for a recall with 15 miles on the odometer which is documented with an invoice that is included. On May 16th, 2001 he took the car back to the selling dealership for a service with 37 miles on the odometer which is documented on the clean Car Fax report that is included. He started the car regularly but drove it sparingly over the years to keep the mileage low. This car was truly treated like a diamond. Unfortunately, Dennis passed in 2017. His wife decided recently to sell his vehicles. MS CLASSIC CARS purchased both his 1972 Dodge Charger 440 and this 1991 Dodge Stealth R/T Turbo in April of 2021. The title to this 1991 Dodge Stealth R/T Turbo is the original in Dennis Yauger’s name. MS CLASSIC CARS will reassign the title to the new owner who will officially be the second owner since MS CLASSIC CARS is a dealer.

The luxurious leather interior is also beautiful with no signs of usage. It retains 100% of its factory original Charcoal interior. This interior still smells and feels new. It’s surprisingly spacious and loaded with options. The original factory plastic for the interior steering wheel, seats and rear cargo area included. The original factory carpeted Stealth floor mats are sealed in plastic and included.

The engine compartment is highly detailed throughout. It retains all of the original factory stickers and paint marks. It retains 100% of its original parts which exception of what was changed by MS CLASSI CARS during the service. Everything is in super condition such as the hood insulation material, rubber hoses, belts, bolts, etc. The car is powered by the original 3.0L DOHC 24V V6 MPI Twin Turbo engine. This engine was factory rated with 300HP and 307 Ft. lbs. torque. The engine was completely serviced by MS CLASSIC CARS and runs excellent. The engine breathes through a performance tuned “Dual Mode” exhaust system that sounds sweet. The engine is coupled to a 5-speed manual transmission that shifts very smoothly. The clutch has no signs of chattering or slippage. This vehicle is equipped with (AWD) All Wheel Drive along with hydraulic control 4 wheel steering. Various sources claim this vehicle did 0-60 in roughly 5 seconds and the quarter mile in roughly 14 seconds!

The undercarriage is very clean and nicely detailed throughout. It retains all of the original factory stickers and paint marks. As the Motor Vehicle Purchase Contract documents Chrysler Rustproofing was applied to the vehicle when it was new.